Divest from the War Coalition Digest - May 2019

Way to go Divest from the War Machine coalition! Your hard work is paying off from coast to coast across the United States. We’ve seen successes ranging in scale from grassroots community actions to national work to align the presidential candidates with our campaign, #PresidentsforPeace. Great work team! Read on to learn what’s happened since our last update and how you can plug in.

Thanks to your all your local efforts, we’re able to give attention to the presidential candidates. Check out our new campaign to push them to divest from war and make significant cuts to Pentagon spending. The amount of money we give the Pentagon is outrageous — it’s time to bring those dollars home to our communities where we need it. Ilhan Omar agrees with us it’s time we cut Pentagon spending because foreign policy is domestic policy. She’s even tweeting about it! Tell the presidential candidates: divest from war and cut Pentagon spending! 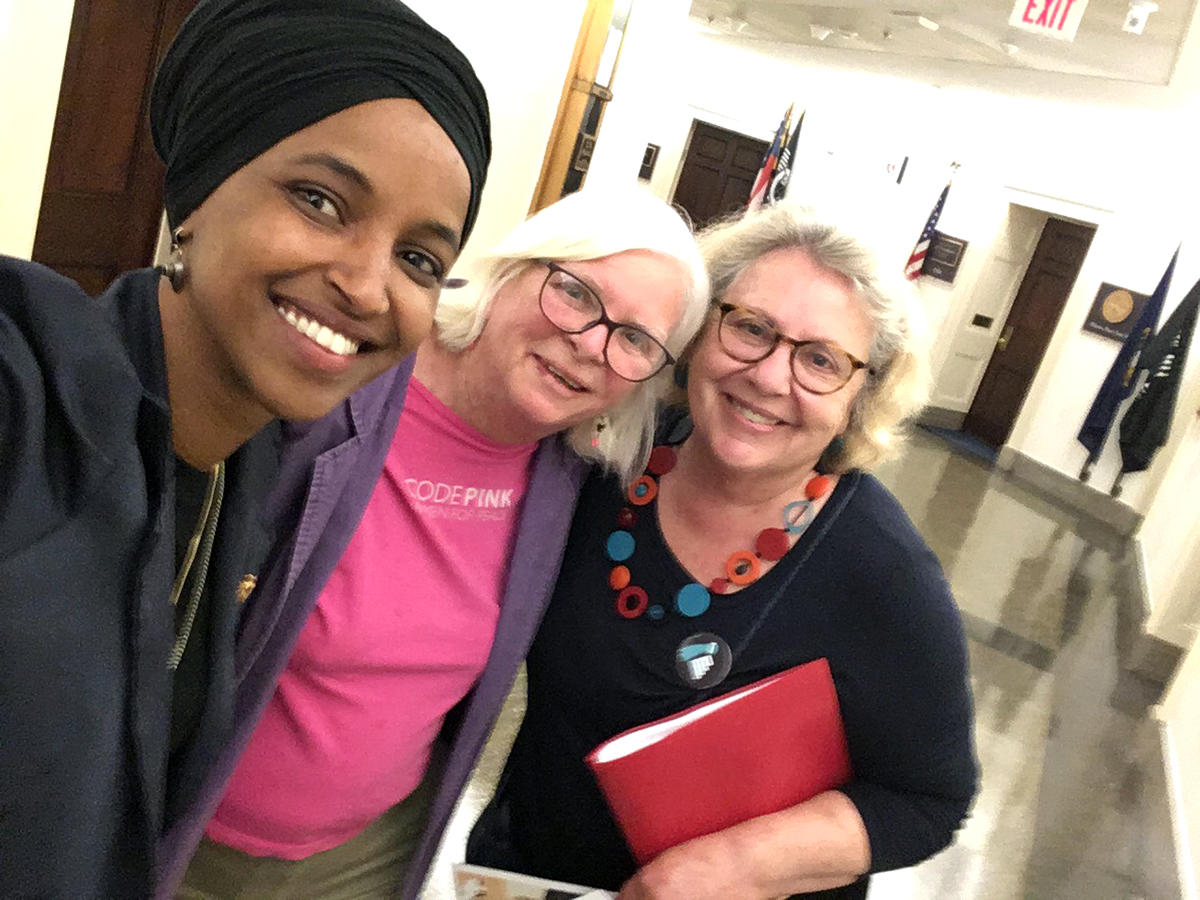 On the West Coast, the coalition to Divest Oregon Public Employees Retirement System (PERS) from the War Machine is holding the next statewide meeting in Corvallis, OR, on June 16th. Details and RSVP here. The Oregon team now has a webpage with a sign up for new members — please share with your Oregonian friends!

Divesters in Charlottesville, Virginia, have managed to get a resolution to divest their city of weapons and fossil fuels in front of the city council. On June 3rd, the Charlottesville City Council will vote on the resolution. This is an incredibly important step to divesting our cities from the war machine — if you live nearby, you can help make history and testify in support of the resolution! Contact David Swanson if you plan to testify. 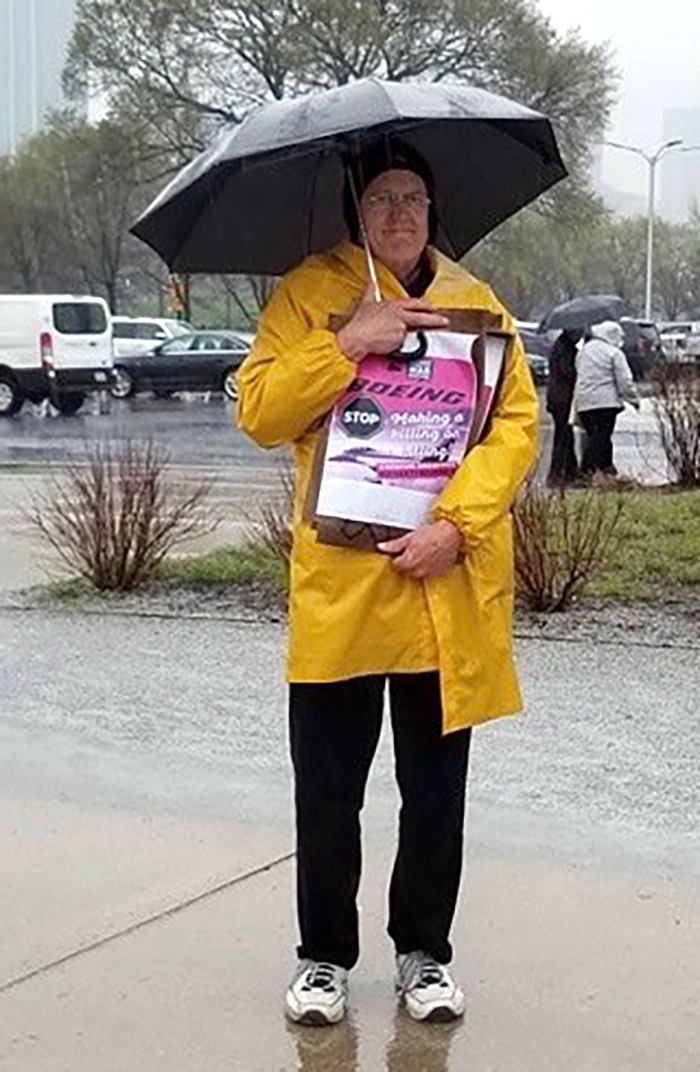 Now the Chicago team is planning another Boeing protest for June 14th. RSVP Here if you can join to put Boeing on notice for making a killing on killing in Yemen and across the world with their death machines.

Your local Philadelphia divest team is organizing a book talk and divestment conversation for June 26th.

Join local author Roy Eidelson to hear about his book Political Mind Games: How the 1% Manipulate Our Understanding of What's Happening, What's Right, and What's Possible and stay to learn about your local divest campaign. More details about the book talk here.

Divest from the War Machine and BlackRock campaign joins the Move the Nuclear Weapons Money panel at the United Nations. 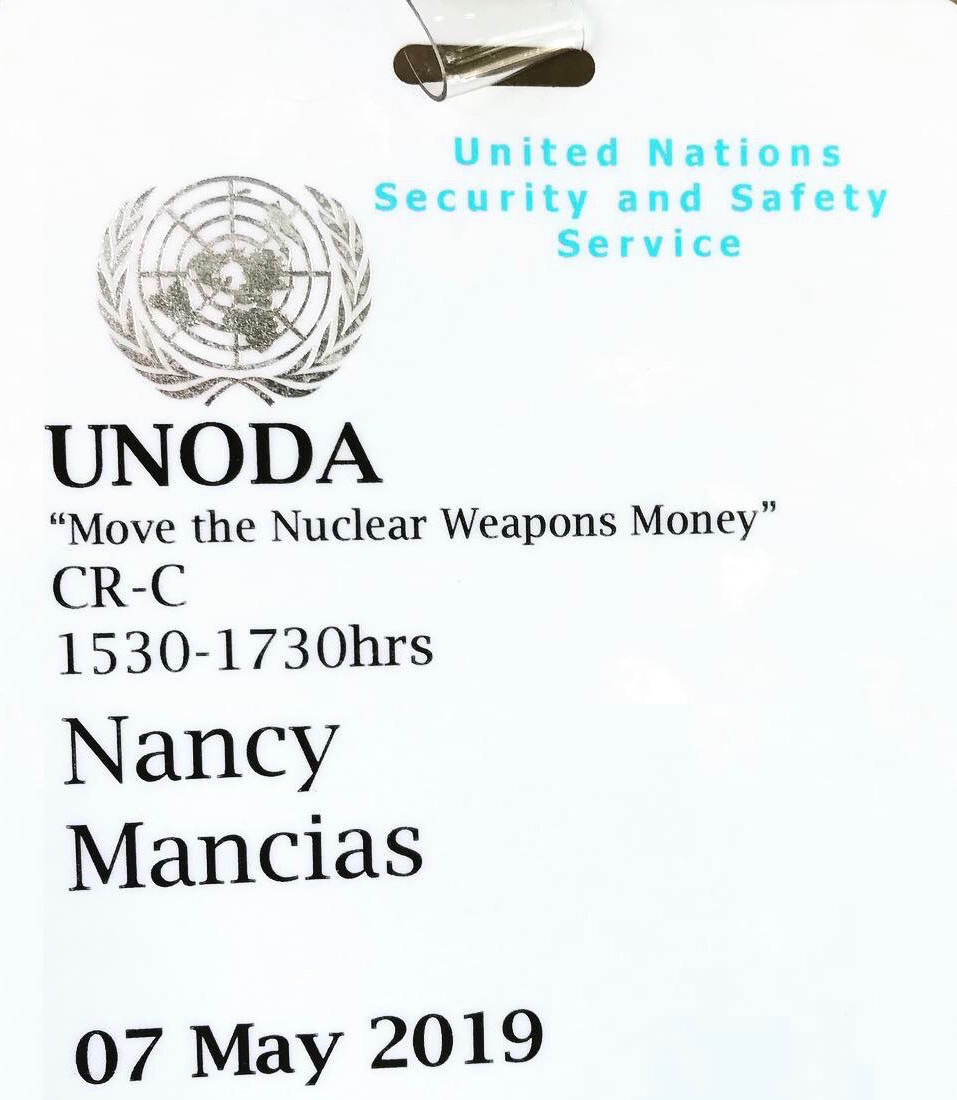 CODEPINK campaign organizer, Nancy Mancias, traveled to the United Nations to join a divestment panel which included Laurie Smolenski, Institute for Economics and Peace, Clara Vondrich from Divest Invest, Nishant Malapatti, financial consultant, and Robert Smith, Investment Community Visibility (ICV) Group. The panel was organized by Alyn Ware and took place during the 2019 Conference of States Parties to the Non-proliferation Treaty (NPT) in Preparation for the 2020 NPT Review Conference. 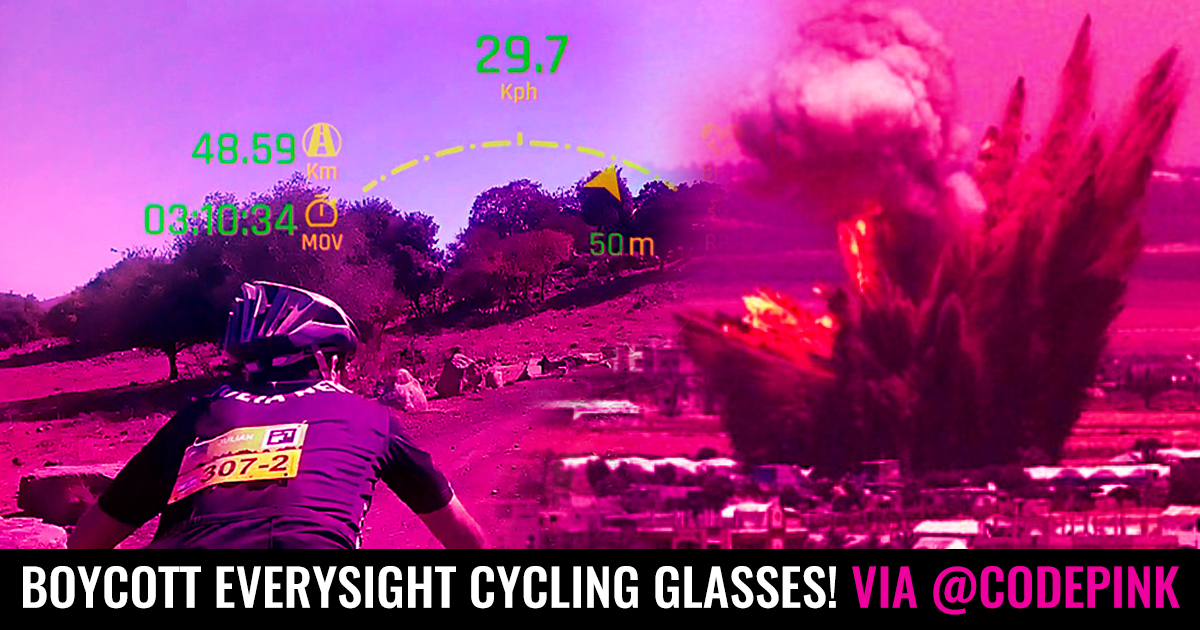 Militarized borders continue to result in unnecessary deaths, from Palestine to the U.S.-Mexico border. Six children have died in U.S. Border Patrol custody since September and Israeli snipers killed at least 35 Palestinian children protesting for their rights in Gaza. Elbit Systems, Israel’s largest weapons company, builds the technology to maintain these violent colonial borders. Elbit has brought its surveillance technologies to consumer markets in the form of Everysight Raptor, “augmented reality” cycling glasses.

We call on all cycling events, stores, and bike riders to boycott Everysight, which is wholly owned by Elbit Systems. Last month, CODEPINK rallied with California activists in Monterey at the Sea Otter Classic, the world’s largest cycling festival. This month, we continue to call on Sea Otter to do the right thing by cancelling Everysight at the Sea Otter Europe in Girona, Spain. Add your voice to the campaign to divest cycling from the war economy by calling on stores, events, and cyclists to Boycott Everysight! 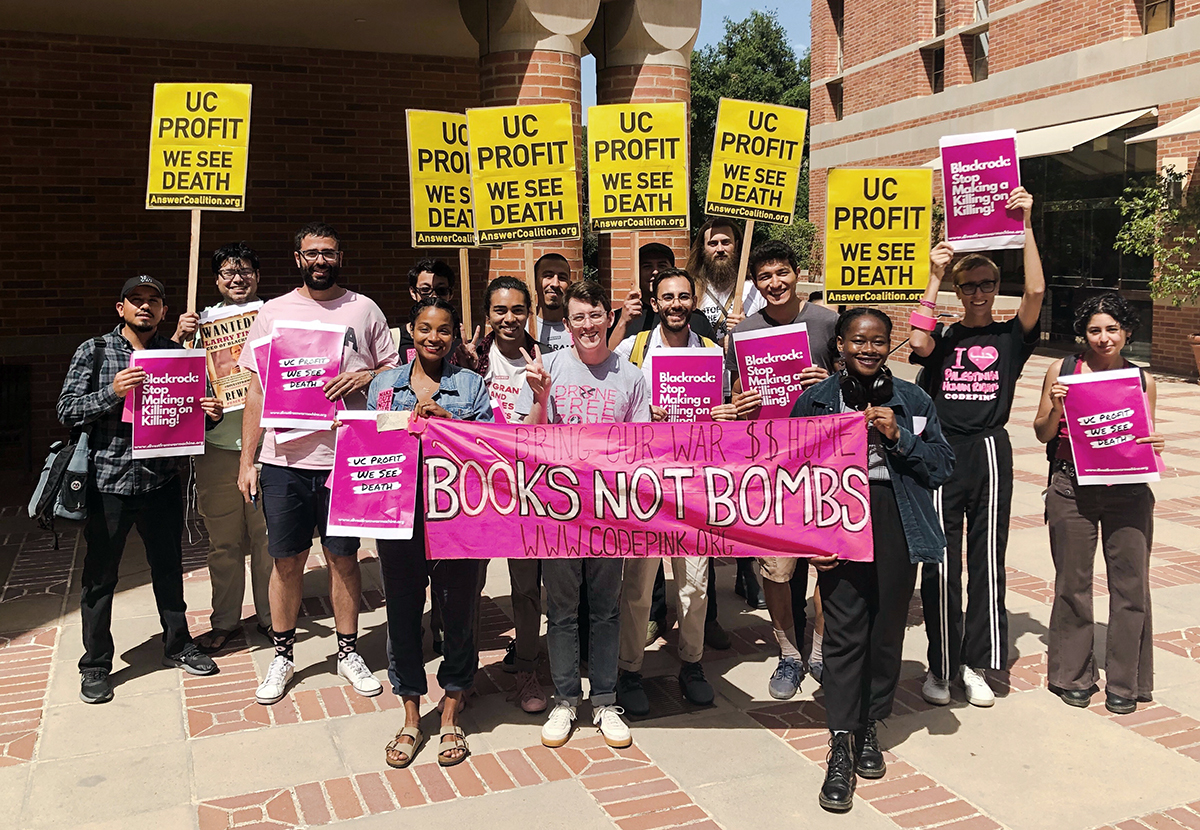 A group of about 30 students and community members alike chanted at the UCLA Larry Fink Investing Conference on April 15 to protest Larry Fink, the CEO of BlackRock, a company which invests billions of dollars in weapons manufacturers. The UC System uses the investment firm Blackrock, which makes billions every year by propping up weapons manufacturers like Raytheon which supply the weapons Saudi Arabia uses to bomb innocent civilians in Yemen. This protest was just the beginning of an exciting campaign to divest the University of California system from BlackRock, and we need you! E-mail Carley if you’re interested in getting more involved. 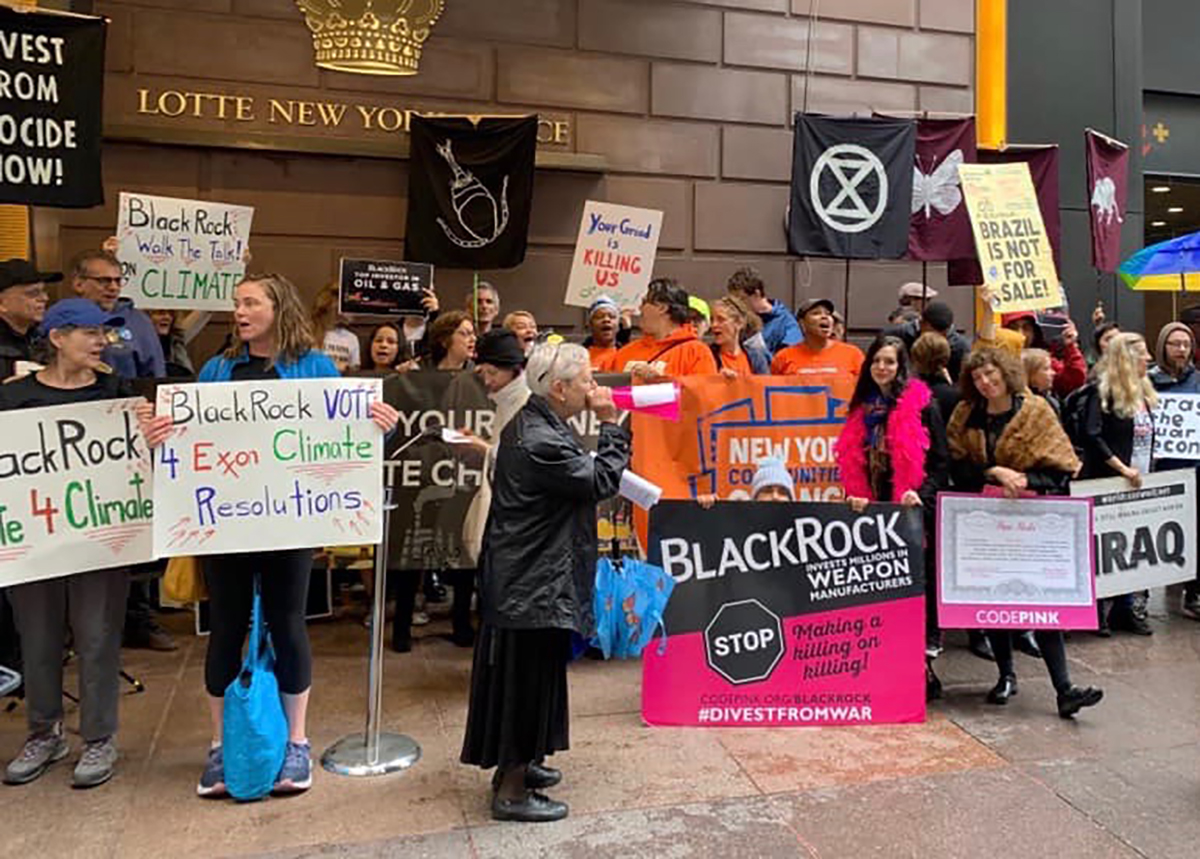 On May 23rd, CODEPINK activists and allies around the country protested the annual BlackRock shareholders meeting to say: stop making a killing on killing! Simultaneous protests were held outside BlackRock offices in Boston, San Francisco, and Santa Monica, CA.  In New York City, a powerful coalition of more than 20 anti-war, climate, and health organizations rallied at the meeting to demand BlackRock immediately end their destructive investments that make a killing on killing. Activists dressed up as billionaires, and held up shares of “Peace Rock” instead of “BlackRock.” CODEPINK led the crowd in a chant to “Divest Now From the War Machine” and handed out educational pamphlets to hundreds of morning commuters. We were joined by activist leaders from diverse organizations including Act Up!, Black Rock’s Big Problem, Democratic Socialists of America, New Sanctuary Coalition, NY Communities for Change, World Can’t Wait, and many others to call on BlackRock to divest from weapons, private prisons, immigration detention, fossil fuels, and pharmaceuticals. We shined a light on how the world’s largest shadow bank is funding death at home and around the world.

There is no better day to explain the horrors of war than on Mother’s Day. This Mother’s Day, CODEPINK in NYC and the Raging Grannies took to Grand Central to educate the public on the need to end human suffering all around the world.  We shined the light on how the US asks one mother’s child to harm another mother’s child in combat abroad.

CODEPINK NYC has also partnered with Move the Money Campaign in asking NYC councilmembers to support City Council Resolution 747, demanding they move federal money from war to our communities! Three council members have signed on so far: Antonio Reynoso, Justin Brannan, and Carlina Rivera. Momentum is building to hold our federal government accountable locally. E-mail Sarah to get involved!

The councilwoman explained her struggles as an immigrant from the Dominican Republic, she urged us to keep up our divest from war work and signed our commitment to not accept campaign donations from weapons manufacturers! If you’re in New York City, contact Zena or Sarah to get involved in the campaign to ask all of our local representatives to stop taking money from weapons manufacturers.

Do you live in Seattle or Baltimore?

Divest teams are ready to work with you in both locations to divest your local funds from war! Email me at [email protected] and I’ll connect you with your local team.

Don’t forget to follow our monthly news-roundup page here to keep up with the weapons divestment related news.