Divest from the War Machine: 5-Part Webinar Series, April 23-May 19 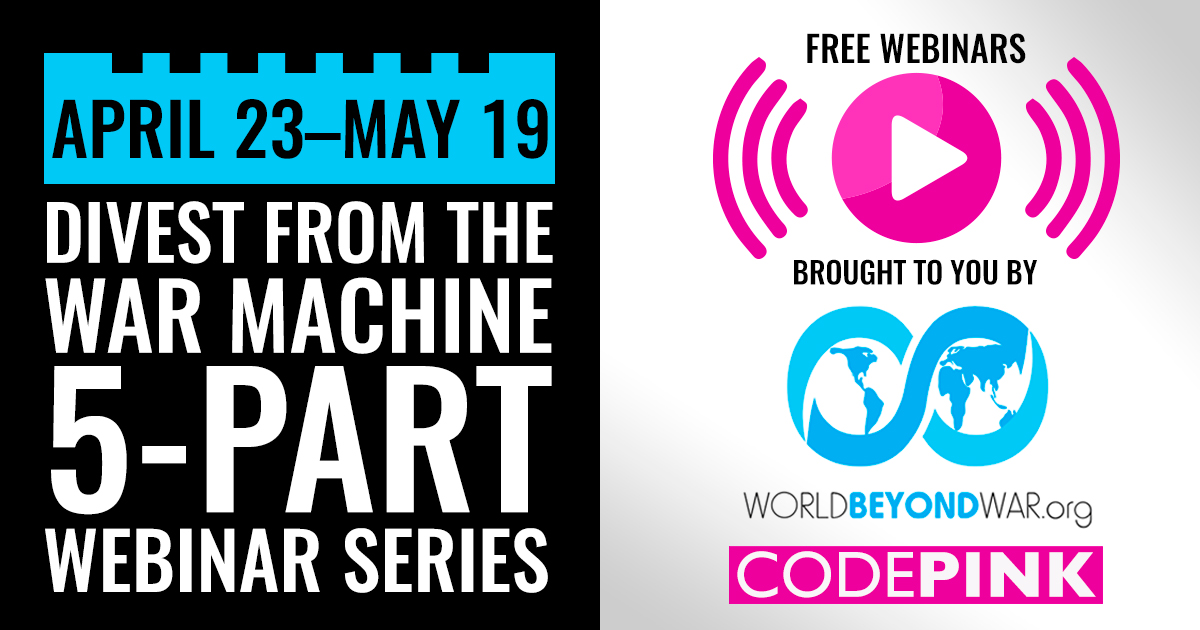 Join CODEPINK + World BEYOND War for a FREE 5-week online webinar series about divesting from the war machine. Starting April 23, we'll explore how to organize to divest funds from weapons manufacturers, military contractors, and war profiteers. We'll feature activists and organizers who have run successful divestment campaigns, to share strategies and tactics about how to replicate these successes in your community.

RSVP for all 5 Webinars here

This 5-week webinar series will explore:

1. Thursday, April 23 at 8PM ET: Divestment 101: Divestment 101 on April 23 will kick off the webinar series by introducing the why, what, and how of divestment. Why do we want to divest from war? What is the war machine? How do we actually divest? We’ll be joined by: CODEPINK’s Divest from the War Machine Campaign organizers Carley Towne and Cody Urban, World BEYOND War’s Organizing Director Greta Zarro, and World BEYOND War’s Co-Founder & Executive Director David Swanson. We’ll talk about the strategies and tactics needed to run a divestment campaign. Plus, David will share the success story behind divesting the city of Charlottesville from both weapons and fossil fuels, and his continuing work as the public representative on the city’s retirement commission. RSVP Here

2. Wednesday, April 29 4PM ET: Creating a Divest Research Team: We'll address common questions about strategic campaign planning, power-mapping, and base building, as well as how to do the research to get the facts to back up your divestment campaign. Featuring Susi Snyder of Don't Bank on the Bomb, the only global report on the private financing of the nuclear weapons industry. RSVP Here

3. Monday, May 4 at 8PM ET: Addressing Divestment Myths/Organizing in the Time of Coronavirus: Now that our society faces an uncertain future and economic downturn, how can we continue to push for divestment from the war machine? Organizing for Divestment in the time of Coronavirus will explore how to respond to common arguments about divestment and profitability and how our campaigns can benefit from incorporating a divest/invest framework. We’ll be joined by: CODEPINK’s Co-Director Jodie Evans, who will discuss how we can utilize this moment to organize local peace economies, and Roberta Giordano, campaigner with BlackRock’s Big Problem network. RSVP Here

4. Tuesday, May 12 8PM ET: Divesting Universities: The 4th webinar in the series will explore university-level divestment campaigns. A wave of student activism has led to grassroots divestment campaigns on campuses around the world. Students are organizing to divest university endowments from destructive industries that threaten the future of humanity and the planet. Featuring Fi Schroth-Douma and Layla Kanaan. Fi Schroth-Douma (pronounced Fee Shroath-Dowma 😁) is a student divestment activist from New Haven, CT, who has organized nonviolent direct action trainings, engaged in rally and song leading, and worked to publicize the movement for Yale University to divest from fossil fuels and cancel holdings in Puerto Rican debt. Beyond endowment justice, she is the Advocacy and Volunteers Coordinator for a reproductive justice student organization, a member of her local chapter of the Sunrise Movement, a staffer at her campus Women’s Center, a member of the Advocacy Team for an initiative to build a youth homeless shelter in her city, and part of a newly emerging campaign for Yale to open its empty dorms and provide housing for all who need it during the pandemic. Layla Kanaan, she/her, was a part of the University of Oregon BDS movement, and worked with SUPER (students united for palestinian equal rights) to pass a pro-BDS resolution on campus. Since graduating from the UO, Layla has hosted a radio show at KBOO community radio, called One Land Many Voices in which she interviews other Palestinians and activists and discusses Palestinian current events and difficult to understand topics.

5. Tuesday, May 19 6PM ET: Coalition-Building: To conclude the divestment webinar series, we'll hear from activists who have successfully built multi-issue coalitions to take on divestment across issue areas, such as combining fossil fuel and weapons divestment to build a broad-based, successful divestment campaign. We'll be joined by three exciting speakers, listed below. RSVP Here

Dalit Baum, director of American Friends Service Committee's Economic Activism Program, co-founder of Who Profits from the Occupation and of the Coalition of Women for Peace in Israel. She is a feminist scholar and teacher who has taught about militarism and the global economy from a feminist perspective in Israeli and U.S. universities.

Paki Weiland, CODEPINK. Paki brings her vast experience as an anti-war activist and, most recently, her experience working to build a broad coalition to divest Washington D.C. from the war machine.