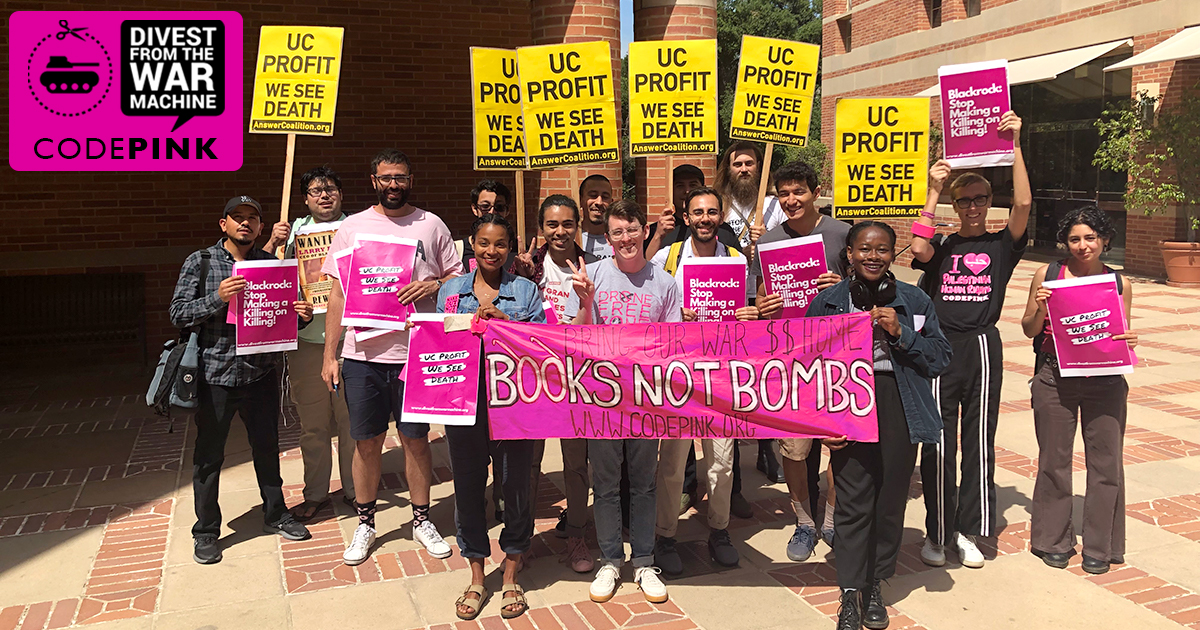 The statewide University of California system loves to claim progressive values of sustainability and diversity. So why is the University of California still using BlackRock—the world’s largest investor in fossil fuels and weapons manufacturing—as their financial manager? If they are so committed to diversity, why is the UC advancing imperialism and funding war through their investments in weapons companies? This is unacceptable. We deserve an education that is uninfluenced by the war machine. Join UC Divest in calling for the University of California to cut ties with BlackRock immediately, divest from all companies profiting from endless war and police brutality, and reinvest in socially responsible alternatives.

Dear Board of Regents,

The same weapons companies profiting from endless wars abroad are also supplying military-grade weapons to police at home. As the events of this summer have made painfully clear, police jeopardize the safety of our most marginalized community members, specifically Black and Brown folks. Because of our commitment to ending militarized violence, we are also uplifting demands to defund UCPD.

So long as the UC invests in weapons companies, they are complicit in and profiting from police brutality and endless war. As a student-funded institution, it is morally imperative for the UC to align its investment practices with student values—and we urge you to take our money out of these violent companies.

University of California funding does not need to rely on investments in companies whose profits depend on killing, destruction, and environmental degradation. By divesting, the UC system can be a leader in climate justice and set a national example by rejecting the influence of the war economy and investing their money in socially responsible, green, and life-affirming alternatives. If the UC fails to act and continues to profit from the US war machine and police violence, it is failing to live up to its purported principles of sustainability and diversity.