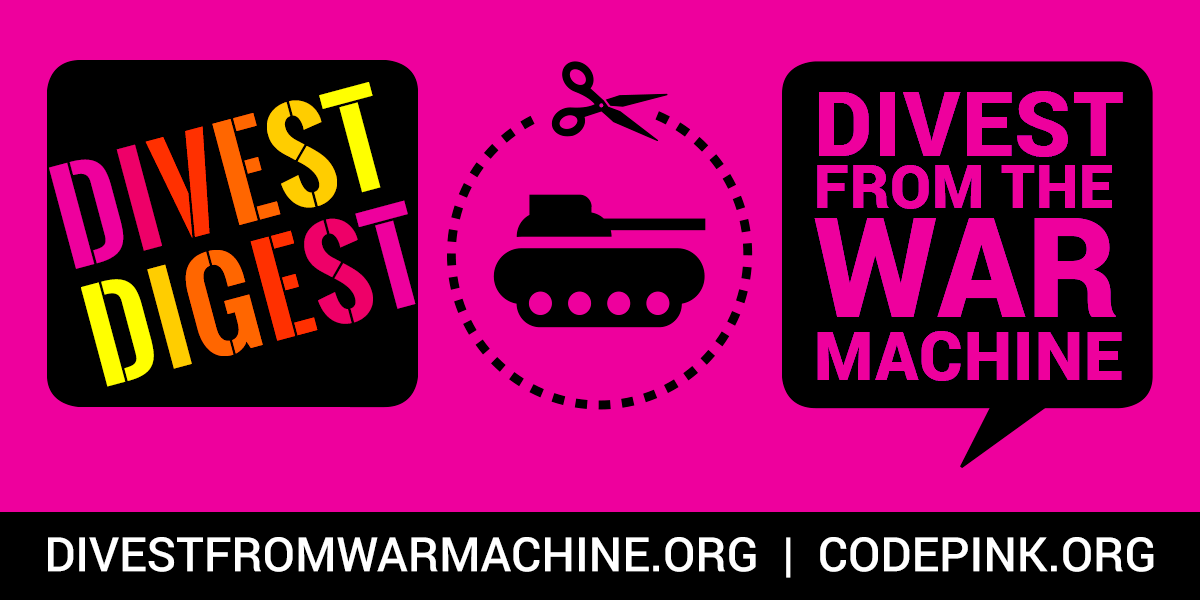 A few weeks ago, CODEPINK Co-founder Medea Benjamin disrupted the General Dynamics Shareholders meeting to confront the CEO and the board with questions about the company’s weapon sales to Saudi Arabia and other repressive regimes, such as the UAE, Bahrain and Egypt.

“I asked CEO Phebe Novakovic how she feels about personally making $21 million a year through a business model that thrives on conflict, death and destruction,” said Medea.

You can hear Medea’s full speech inside the shareholder’s meeting here. 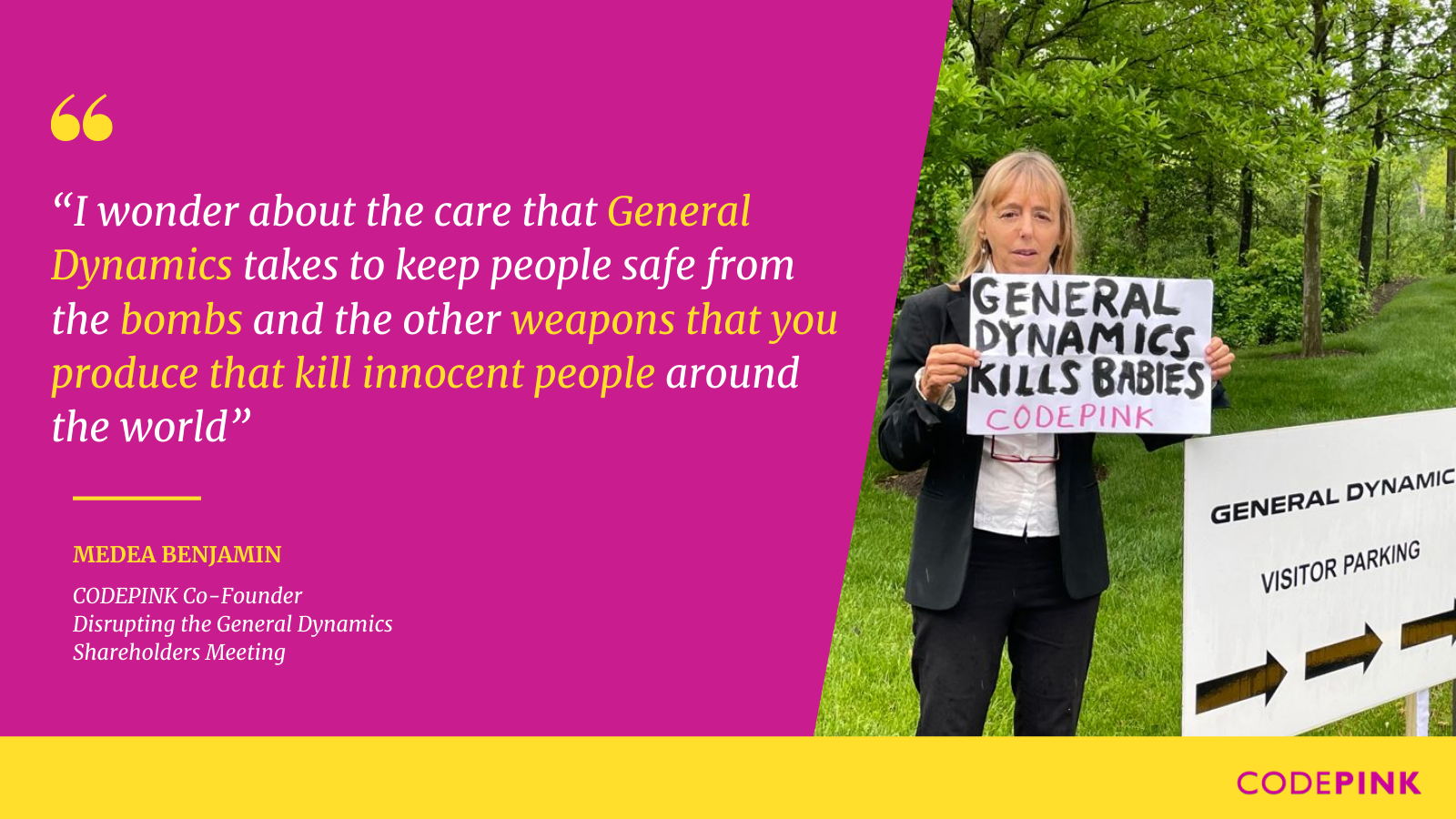 Top weapons companies like General Dynamics, Raytheon, and Northrop Grumman derive a large portion of their profits from the federal government, meaning our tax dollars fund these “merchants of death” every year. Congress is now deliberating on the Pentagon budget for 2022, which is why it’s more important than ever that we call on Congress to reduce the Pentagon budget and invest in our communities!

Medea’s bold action reminds us of the importance of our continued work to Divest from the War Machine. Read on to continue to be inspired by our work and learn how you can get involved!

Thanks to the energy, engagement, and enthusiasm of 2,000 CODEPINK members, Ritu Khanna, businesswoman and wife of Congressman Ro Khanna, now has no investments in weapons manufacturers! This victory goes to show that when we remind our allies and elected representatives that they shouldn’t be profiting from or taking campaign contributions from companies that make a killing on killing, they listen! 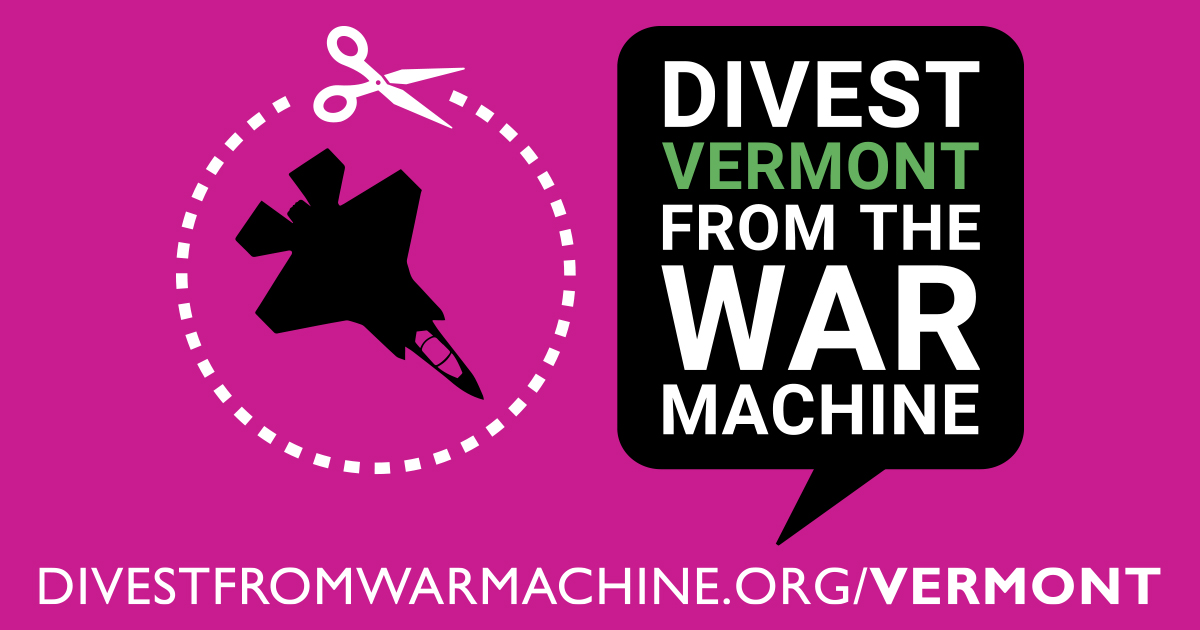 Vermont— Do you live or work in Vermont? A new and growing coalition of peace activists in Vermont are working to divest cities and institutions across the state from the war machine! On Wednesday, May 19 we hosted a Divest Vermont from the War Machine webinar to discuss the campaign and ways people can get involved. You can watch the educational webinar here and sign up to get involved here and an organizer will be in touch! 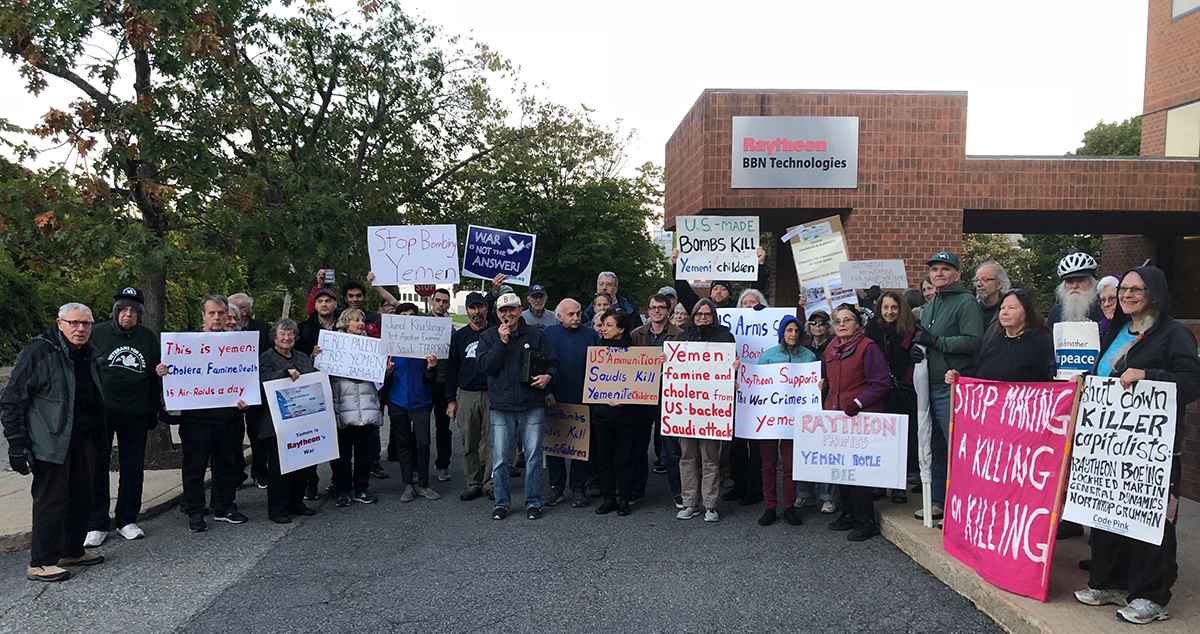 Massachusetts— Raytheon Technologies, headquartered in Waltham, Massachusetts is one of the leading death merchants in the largest war machine ever constructed – the U.S. military-Industrial complex. Raytheon sells billions of dollars of arms to Saudi Arabia, including guided “Paveway” bombs that are used against civilians in the current war the Saudis are waging on Yemen.  The last two Secretaries of Defense – previously Mark Esper and currently, Lloyd Austin have deep connections to Raytheon, illustrating the corporate and military control over foreign policy that underlies politics.  The Raytheon Anti-War Campaign began in 2018 and has held numerous protests at the Raytheon corporate sites in eastern Massachusetts and in public places to make the link that: “Raytheon Weapons Kill Yemeni Children!” In addition, Raytheon is one of the arms corporations promoting and profiting from the new nuclear arms race by engineering and manufacturing the so-called “nuclear long-range standoff missile” (LRSO), an air-launched, new generation weapon designed for first-use of nuclear weapons.  There are Raytheon corporate outposts all around the U.S., a campaign has begun in North Carolina that is working with folks in Massachusetts—find one near you and begin a campaign.  Contact: [email protected] for more information! 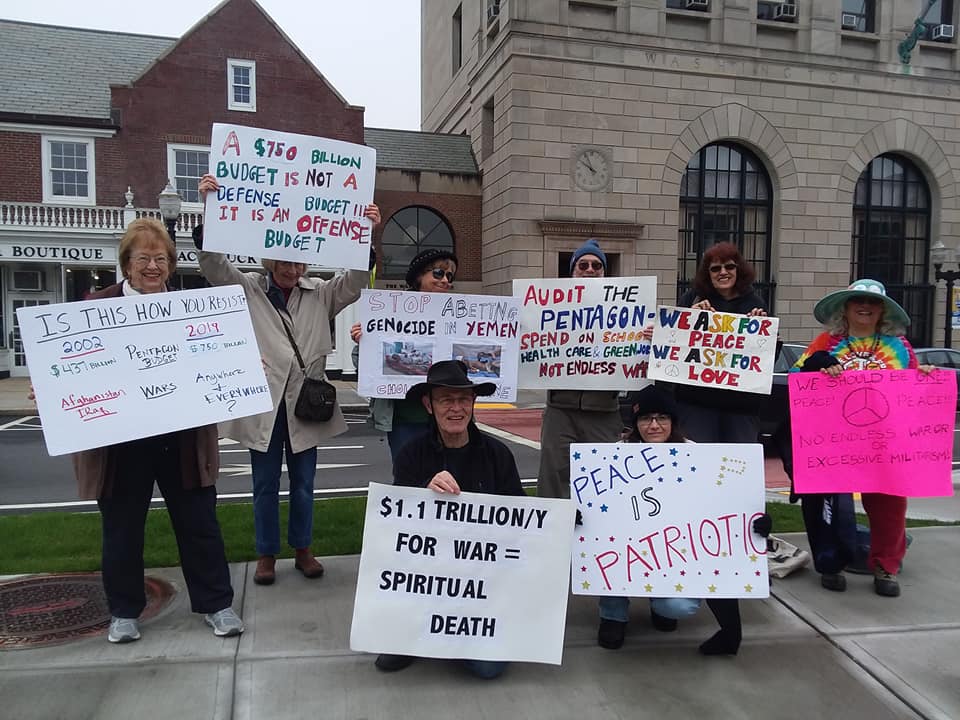 Rhode Island— Do you live or work in Rhode Island? A coalition of peace activists in Rhode Island have a campaign to pass historic legislation in the Rhode Island State Legislature which would require the state of Rhode Island to Divest its state pension funds from military weapon manufacturers and contractors. You can take action now by emailing and calling the House Finance Committee to support House Bill #6026 to divest from war!

Oregon— Are you an Oregon resident and recipient of the Public Employee Retirement System (O-PERS)?  A statewide coalition of environmental activists held a town hall with Oregon Treasurer Tobias Read to challenge him to divest the state of Oregon from fossil fuels.  CODEPINK Divest activists endorsed and attended the town hall, since Oregon state invests its assets through BlackRock, the most notorious war investor on the planet!  Reach out to [email protected] if you’d like to support this statewide campaign! 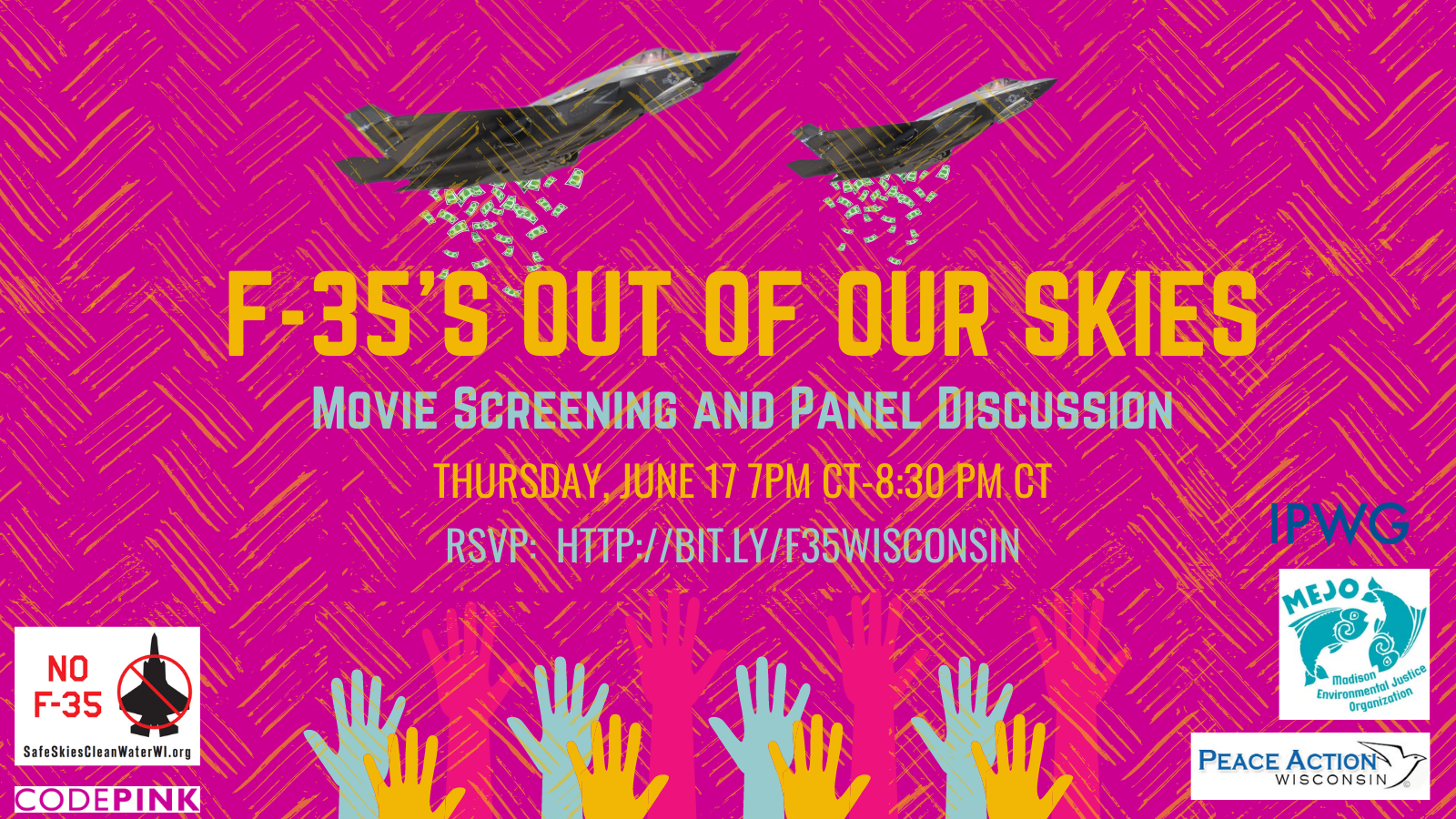 Wisconsin— CODEPINK is partnering with Safe Skies Clean Water, Peace Action Wisconsin, Interfaith Peace Working Group and more for an online screening of Jet Line: Voicemails from the Flight Path. Following the film screening, we’ll hear from local community activists in Wisconsin and Vermont who oppose the F-35 programs. RSVP here to join us for this special event on June 17th from 7-8:30 PM CST! 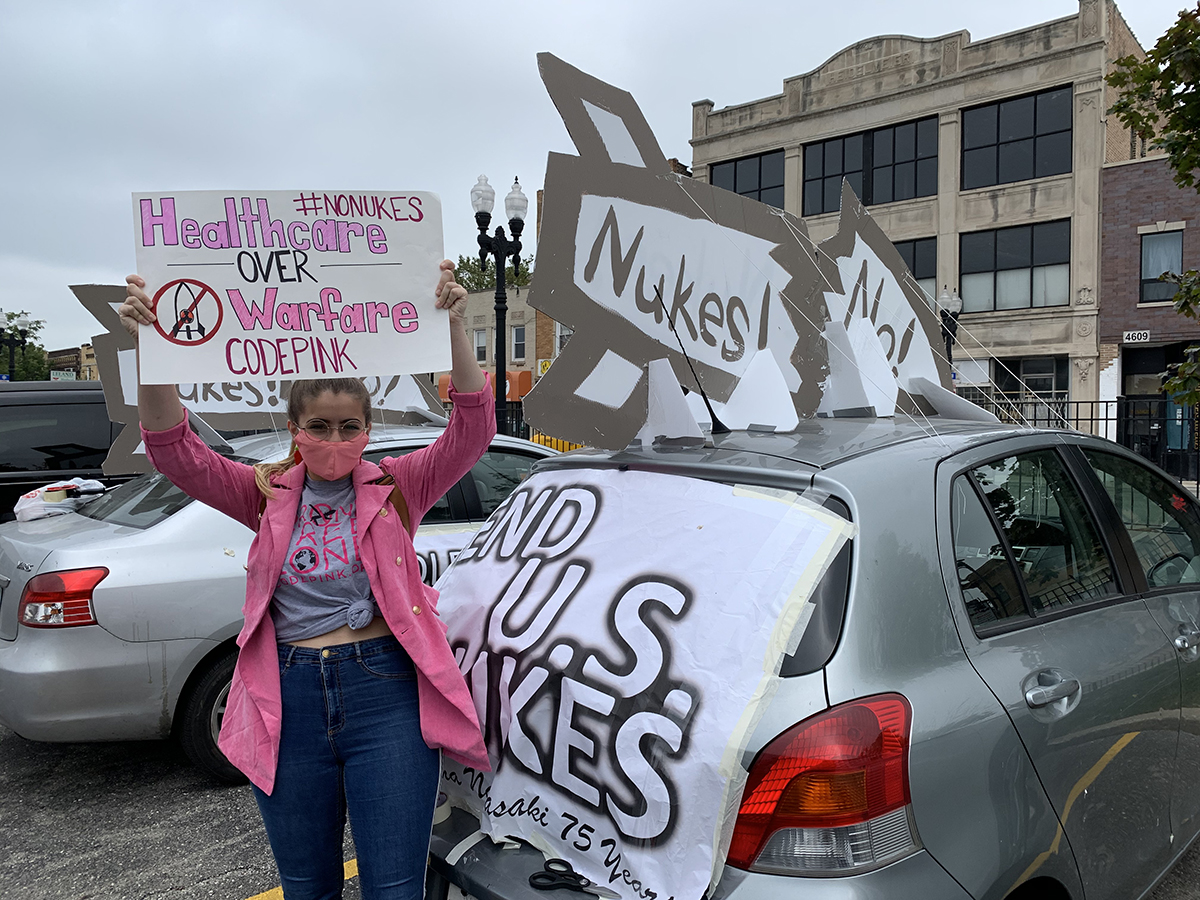 Chicago— Divest activists in Chicago spent nearly a month calling the Chief Investment Officer of the Municipal Employees’ Annuity and Benefit Fund EVERY SINGLE DAY until they got an answer.  Unfortunately, that answer was to go through a whole additional process of filing a Freedom Of Information Act (FOIA) request to secure the fund’s investment records.  After researching the records, it turns out that these Chicago public assets are in fact invested in weapons companies, so the Divest activists are preparing for their first round of City Council meetings to win support from within the City government. Contact [email protected] to get involved!

Philadelphia— Activists with the Divest Philly campaign continue their work to divest the Philadelphia Pension Board from nuclear weapons.  Multiple community events have been used to spread awareness about the campaign and to draw in more people.  Meanwhile, they continue to try different tactics to grab the attention of the Pension Board members to whom they are making their demands. You can learn more about the campaign and sign up here!

Portland— Two demilitarization campaigns continue in Portland, OR.  Activists put on an “actionar” (a webinar with an action component) to demand from local legislators that the Portland Police and Multnomah County Sheriff end their collaboration, training and arms sharing with federal troops.  At the same time, BDS activists are preparing to deliver a petition demanding that Portland (1) end police training with Israeli forces, (2) stop contracting with militarized security company G4S for city security and (3) introduce international human rights language into the city’s business procurement policies.  Contact [email protected] to learn more about these two campaigns to end Portland’s connection to the War Machine! 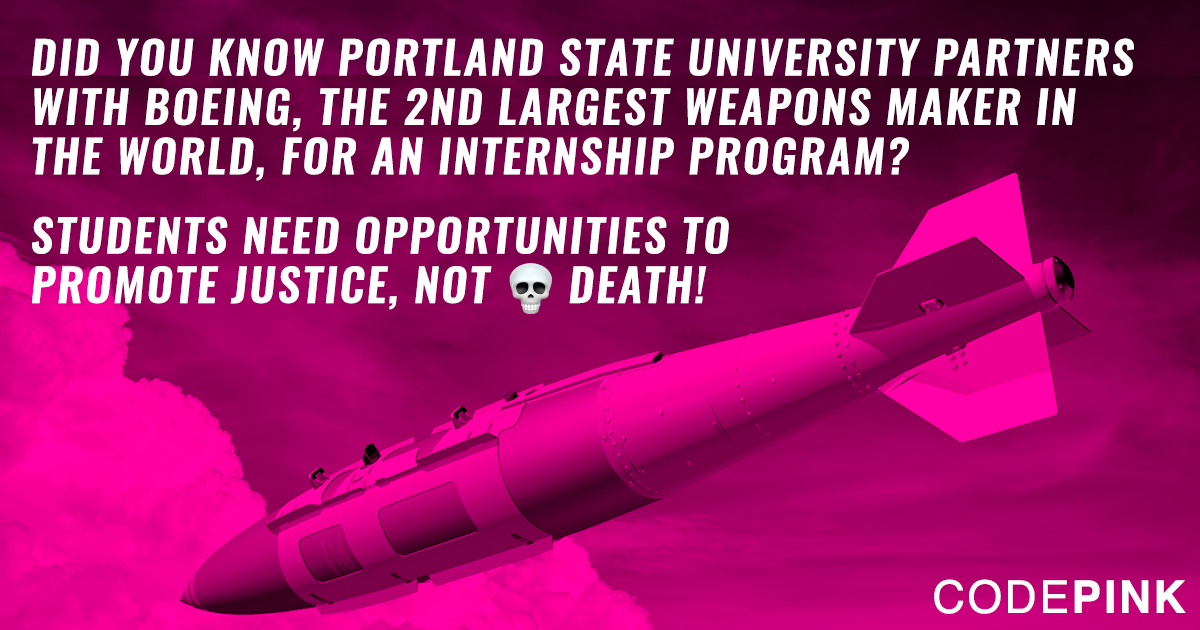 In a MASSIVE VICTORY for student activists at Portland State University, The Associated Students of PSU held a hearing on a resolution brought by students to end the university’s relationship with Boeing, most notably its annual internship program with the School of Business.  After two meetings in which testimonies were given both for and against, the resolution overwhelmingly passed!  After celebrating this long-fought-for achievement, students will begin planning to bring their demand to the PSU President with the ASPSU’s support.  If you are a student, faculty or staff at PSU and are interested in getting involved in this campaign, don’t hesitate to reach out! 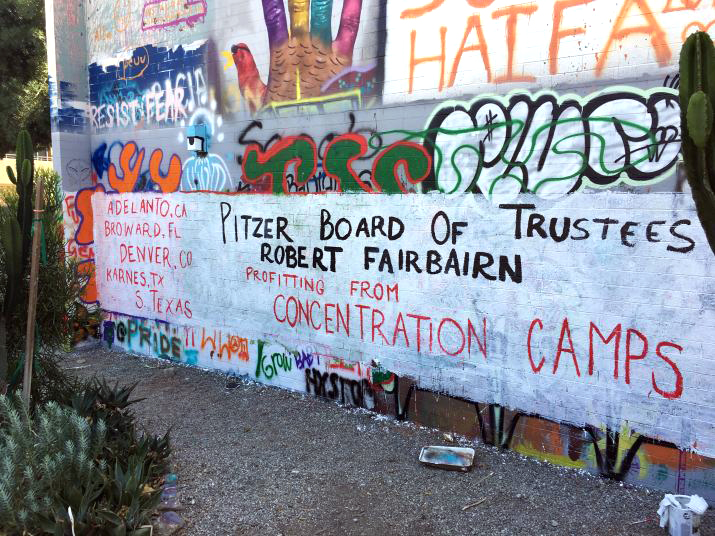 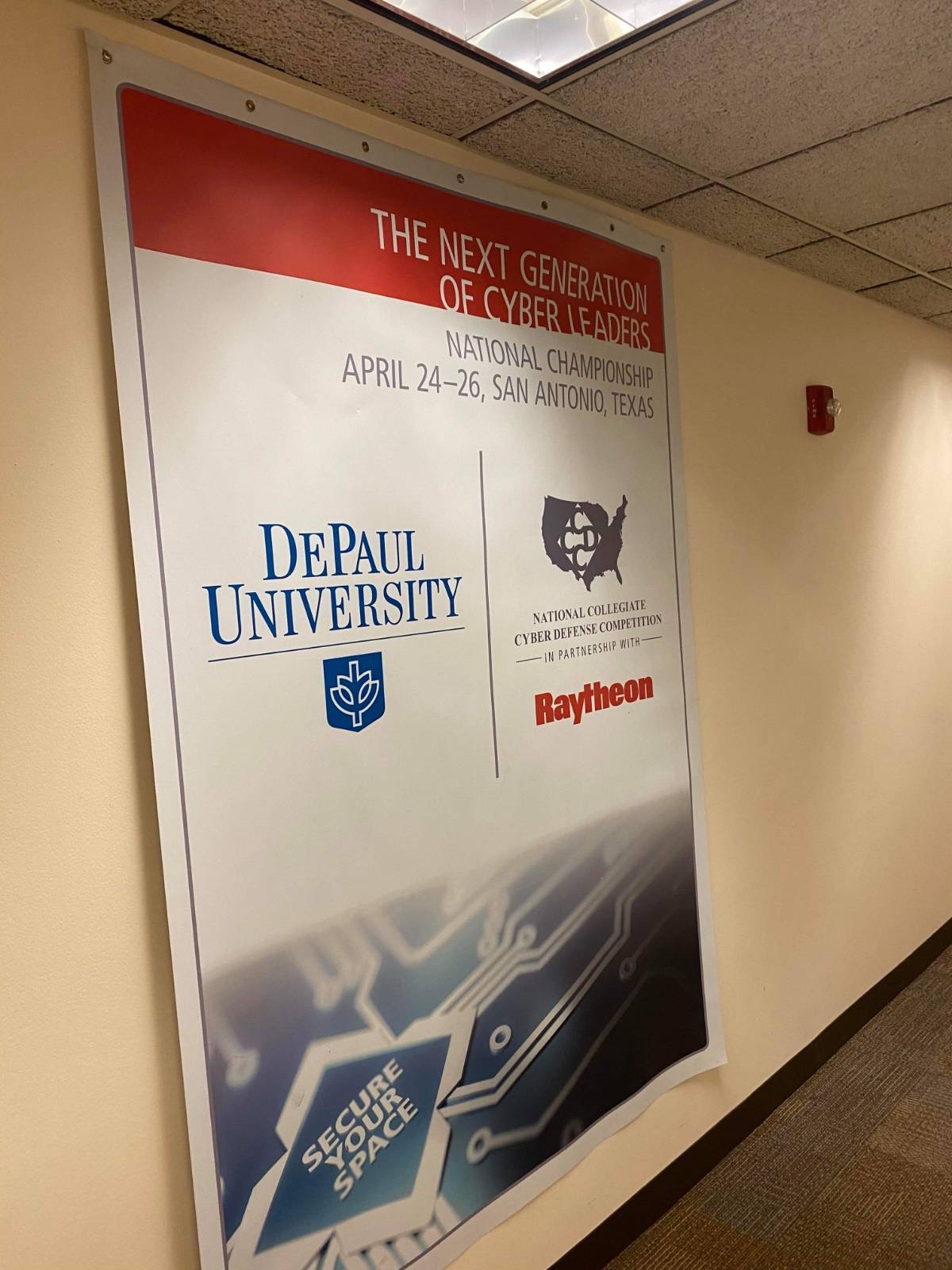 DePaul University: DePaul University’s student government echoed the demands of the DePaul divestment campaign in a statement on May 21st saying “as the Student Government Association, we stand in solidarity with DePaul’s Students for Justice in Palestine and endorse their demands for DePaul University to increase protection of Palestinian students on campus and make the University’s investment portfolio publicly available so students, faculty, and staff can have transparency about where the university is investing tuition dollars.” See DePaul’s divestment petition here!

NYC— On May 25, CODEPINKers in NYC held a powerful protest in front of the BlackRock building the day before BlackRock’s annual shareholder meeting! Blackrock is the top investor in weapons manufacturers and climate disaster. Drawing from a diverse coalition of intersectional struggles, speakers at the protest included ActionCorpsNYC, World Beyond War, the Poor People’s Campaign, Justice for All, an NYU Student, and CODEPINK. Making our voices heard, our annual BlackRock protest marked an important convening for our CODEPINK NYC group. If you’re in the NYC area and you’d like to get involved in ongoing campaigns to divest from the war machine, email [email protected]. Make sure you also sign our petition to divest BlackRock from war!

P.S. CODEPINK is introducing our very new Palestine T-Shirts! Palestinians need your support now more than ever. Show your support for Palestine loud and proud by wearing one! It’s perfect for any anti-apartheid activist! Buy them here!